The Story Behind Engagement Rings 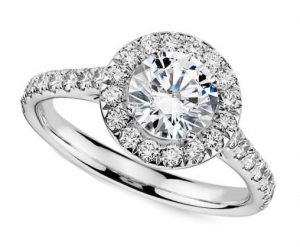 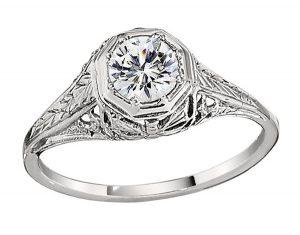 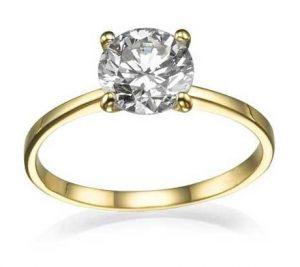 When a couple decides to make the ultimate commitment, it is usually sealed with an engagement ring..

The engagement ring is believed to date back to ancient times.  Anthropologists believe this tradition originated from a Roman custom in which wives wore rings attached to small keys, indicating their husbands’ ownership.

In 1477, Archduke Maximillian of Austria commissioned the very first diamond engagement ring on record for his betrothed, Mary of Burgundy. This sparked a trend for diamond rings among European aristocracy and nobility.

The sentimental Victorians (Mid 1800’s) popularized ornate engagement ring designs that mixed diamonds with other gemstones, precious metals and enamels. Often these rings were crafted in the shapes of flowers and were dubbed “posey rings.” Diamond rings crafted during the Edwardian era (1901-1915) continued the tradition of pairing diamonds with other jewels, commonly mounted in filigree settings.

In 1947, De Beers launched its now classic slogan, “A Diamond is Forever.” This campaign spurred even more sales. The implied durability of a diamond conveyed the meaning in the American psyche that marriage is forever. A diamond’s purity and sparkle have now become symbols of the depth of a man’s commitment to the woman he loves in practically all corners of the world. The opening of the DeBeers mines in Africa made diamonds more accessible. In the 1930s, when demand for diamond rings declined in the U.S. during hard economic times, the De Beers Company began an aggressive marketing campaign using photographs of glamorous movie stars swathed in diamonds. Within three years, the sales of diamonds had increased by 50 percent.

Diamonds still signify the celebration of a union and cherished memory, though more cuts make more styles an easy option for diamond lovers.

According to The Knot’s 2019 Jewelry & Engagement Study released this past November, the national average spent on an engagement ring in the United States stands at $5,900.

86% of the engagement rings purchased had diamonds as their main stone. 10% chose other stones such as moissanite, sapphire, morganite and aquamarine. Stones like emeralds should not be worn every day stones due to the hardness and potential for scratching and abrading. 3% chose colored diamonds and 1% chose to have no stones in their rings. It iall depends on your wants and style.

So, what do you do when you are ready to pop the question but you don’t know where to begin? That is where DW Gem Services, LLC  can help. Set up an appointment to meet with me and we will discuss budget, diamond style, size and quality and the type of setting you would like. I have access to any diamond you wish for. I have a jewelry designer who can create any setting you want or I if you are looking for a vintage ring, I can do that as well.  Working personally with someone who has experience and understands the jewelry business, should give you the assurance that you are getting treated with honesty and fairness. I won’t be happy unless you are happy.

Watch for my next blog when I discuss the 4 C’s of diamonds and how to know what it all means.